“The message we’re hearing from our communities is clear: this budget must include a large-scale investment in affordable housing,” said Vancouver East MP Libby Davies at a press conference in Vancouver’s Downtown Eastside. “Homelessness is at crisis levels, and thousands more Vancouverites are having problems with housing affordability. It’s time for the federal government to invest in new social and co-operative housing, and to fund repairs and retrofits for existing affordable housing stock.”

Davies says she plans to reintroduce a private member’s bill in the new parliament to define housing as human right.

“Thousands of forestry, building trades and construction workers across Canada are losing their jobs,” said the Vancouver Kingsway MP. “Targeted investment in housing is the smart way to reduce housing wait lists, create jobs in construction and help revitalize the Canadian forestry sector– all at the same time.”

Both NDP MPs say their party will push to make federal investment in housing a priority when Parliament resumes on January 26.

Participants at the press conference included:

Wayne Peppard – BC and Yukon Building and Construction Trades Council 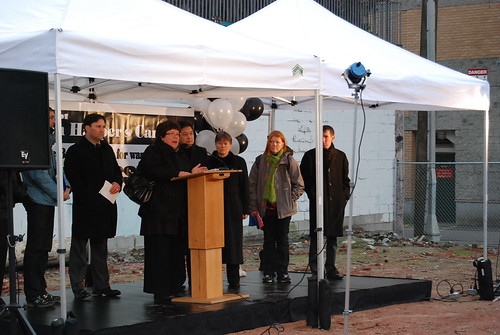